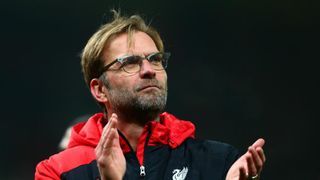 Liverpool manager Jurgen Klopp believes Premier League leaders Arsenal are "beatable" but is aware of the tough test his side face.

Arsenal travel to Anfield on Wednesday in hope of keeping their spot at the summit of the Premier League table.

"Arsenal and Arsene have their own style, it’s possession football, so it’s clear that if we want to play the same way we will be without a chance because they’ve been doing it for longer," he said.

"Arsenal are not only a good possession team, that’s the problem, they have good counter-attacks too and that’s what you have to be aware of.

"It’s a job but it’s a really nice job to think about solutions and how to stop them coming through with their plan. I like things like this.

"They are beatable. It is not easy, but it’s possible."