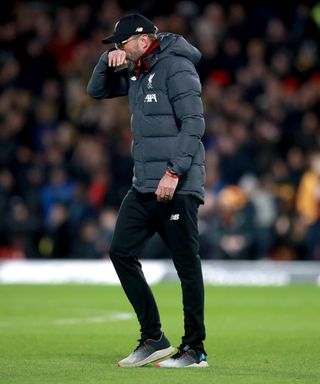 Liverpool manager Jurgen Klopp congratulated Watford after they became the first team in the Premier League this season to beat the Reds with a 3-0 win at Vicarage Road.

A second-half brace from Ismaila Sarr put the Hornets in control before the Senegal attacker set up Troy Deeney 18 minutes from time to provide the cherry on top of a fine performance from Nigel Pearson’s side.

It ended the Reds unbeaten run of 44 league games, meaning they fall short of matching Arsenal’s Invincibles from the 2003-04 campaign, who had gone the season and overall 49 matches without defeat.

Watford’s victory over Liverpool is the biggest over a side starting the day top of the #PL by a team in the relegation zone#WATLIVpic.twitter.com/KqeaVMK53e— Premier League (@premierleague) February 29, 2020

The first Premier League loss for Liverpool in over a year does little to their hopes of winning the title, but ensured they missed out on including equalling Manchester City’s run of 19 straight top flight wins.

“I am not surprised by the performance because that would mean I never saw something like that before. I saw it a lot of times,” Klopp said.

“What I can say and I think is 3-0 is a bit harsh, but we had a big hand in that so we don’t have to think about that.

“The most important thing is congratulations Watford, well deserved. That is what should be the headline. We didn’t perform like we should have and Watford performed exactly like they wanted.”

After losing at Atletico Madrid on February 18, Liverpool have now suffered two defeats in three games in all competitions.

When quizzed on missing out on becoming an invincible like Arsenal, Klopp again reiterated he was not focused on that achievement.

“Tonight we were not good enough and it is not a plus for me that in history they will look back in 500 years and say Liverpool nearly did it.

“I see it rather positive because the closer we get to these records, I am not bothered, but I am not sure how other people think about that so from now on we can play free football and don’t have to defend or try to get the record. We just try to win football games again and that is what we will do.”

After creating the better chances in the first half, the Hornets made their dominance count when Sarr opened the scoring in the 54th minute from Abdoulaye Doucoure’s cross.

Watford made it 2-0 six minutes later when Deeney produced a wonderful through ball for Sarr to race away on goal and he showed great composure to chip the onrushing Alisson.

Trent Alexander-Arnold’s poor back pass allowed Sarr to get in again with 72 on the clock and he laid back for Deeney to curl home and send Vicarage Road into pandemonium.

The 3-0 win took Watford out of the relegation zone on goal difference, but Pearson insisted now was not the time to get carried away.

“I wish I could enjoy the good times a bit more,” the 56-year-old admitted. “I am already looking at the next game in my own mind.

“It is very satisfying and it is good to get reward for everybody’s work. My job is to steer the ship and try to keep some perspective in terms of where we are.

“It is a very satisfying and fantastic win, but with 10 games left we have got an awful lot of work to do.

“Our season so far has been I suppose littered with disappointment so we have a lot of catching up to do.”