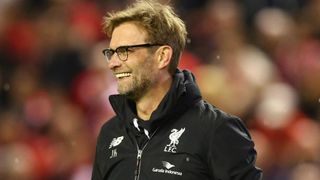 Liverpool manager Jurgen Klopp has called on his players to show the same passion they displayed against Stoke City on Tuesday when they contest the League Cup final next month.

Klopp's men advanced to the decider after a 6-5 penalty shoot-out victory over Stoke at Anfield.

Mark Hughes' men trailed 1-0 on aggregate going into the second leg but levelled the tie thanks to a Marko Arnautovic strike.

And with neither team able to find a decisive goal in extra-time, it came down to spot-kicks.

A sudden-death miss from Marc Muniesa saw Joe Allen send Liverpool through to their second League Cup final in five seasons, having won the competition in 2011-12 under Kenny Dalglish.

With Manchester City and local rivals Everton yet to play their second leg, Klopp said he is not worried about who Liverpool will face, just as long as his side lift the trophy by the end of the game.

"It will be special to go to Wembley of course," he told Sky Sports. "We have to wait for the opponent, maybe the whole [of] Liverpool is on their legs when we play against Everton.

"Of course this would be a perfect match, but if [Manchester] City is in the final that is cool too! We will watch tomorrow the second semi-final and we will see, but it will be special."

Klopp's previous experience of playing at England's national stadium was a painful one, his Borussia Dortmund team losing the 2012-13 Champions League final there to Bundesliga rivals Bayern Munich.

"Like always, when you are in the final, Wembley is a cool place to play football but when you are there it is only really good if you win, so we only go there to win," he said.

"If the players have the same attitude like they had today, the same readiness and passion, then we have a great chance to win a cup."

"It will be great for Liverpool if we play Everton, but whether Man City or Everton I don't care, as long as we win the cup."