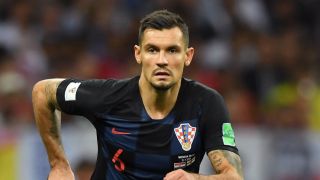 Klopp's comments come after Lovren claimed that based on his recent exploits, including with the Reds in the Champions League, people should view him as one of the world's best defenders.

Lovren has been considered by some as error-prone, but Klopp feels this assessment has been blown out of proportion.

"People very often judge other people pretty early. Since I came in, maybe Dejan made three or four mistakes, two of them in the Tottenham game, but it's for sure not 15 or 20," he told Liverpool's website.

"90 per cent of the time he played outstanding, 95 per cent absolutely OK, and five per cent probably he was not at his best. But you will find these problems for pretty much all the players in the world.

"He played a fantastic tournament so far. I'm really happy for him. The country is small but all the players are pretty big. It's impressive what they are doing.

2 - Dejan Lovren is set to become only the second player to play in the Champions League final for an English club, and the World Cup final in the same year (after Thierry Henry in 2006). Defence. July 12, 2018

Lovren's Croatia team defeated England in Wednesday's World Cup semi-final to take their place in the Moscow showpiece against France.

They had previously defeated Denmark and hosts Russia on penalties, becoming the first team ever to advance to the final by winning three consecutive extra time games.

This is also the first time the Balkan nation has made the final - the furthest they had advanced previously was in France in 1998, when a Davor Suker-inspired side were knocked out by the hosts in the last four.