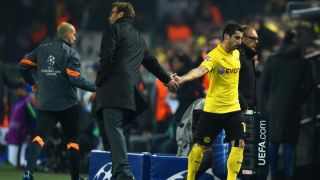 Liverpool manager Jurgen Klopp has revealed he had no interest in signing Henrikh Mkhitaryan before the attacker joined Manchester United.

Mkhitaryan and Klopp were together at Borussia Dortmund, but they will be opponents in the Premier League this season after the former joined United.

The 59-time Armenia international starred in the Bundesliga after being bought by Klopp from Shakhtar Donetsk.

However, the German had no desire to reunite with Mkhitaryan at Anfield as the 27-year-old instead completed a £26million move to United.

"I had that player. If you have had players, you know more about them. You want to learn about other players. That's how it is," Klopp told the Liverpool Echo.

"I knew quite early that he was going this way [to United]. There was absolutely no reason for me to jump in there. That isn't how we work.

"We didn't look for players we had already worked with. If you do that, you know their good, their bad and you wonder whether you will do it again.

"We could have gone for a lot of players. But, first of all, you have to think, 'what do I need?'"

Klopp has instead brought in numerous others, including Sadio Mane, Georginio Wijnaldum, Joel Matip and Loris Karius.