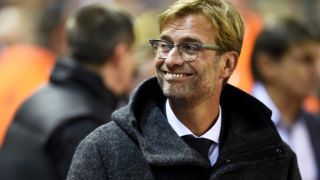 Jurgen Klopp has dismissed suggestions Liverpool's recruitment process is unusual and insists the club would not sign any player without his say-so.

Liverpool's transfer structures have been brought back into focus in recent days following a series of interviews carried out by former Reds boss Brendan Rodgers who claimed the club's "transfer model is slightly different to others".

And this is a situation the German says he is comfortable with.

Asked if he had the final say on transfer dealings, he told a news conference: "Yes. But does anybody have the final say?

"For example, say I wanted to take Zlatan Ibrahimovic and we have to pay £100m plus a big contract at 34 I think I would have to ask first!

"Sometimes my staff and I have an idea about a player, then we collect information and then we have players our scouts bring in and we speak about it.

One player likely to leave Liverpool in the summer is 19-year-old Jerome Sinclair who has rejected a new deal and will instead explore the possibility of playing in Spain.

Klopp, who handed Sinclair his first Liverpool start in the FA Cup third round tie against Exeter, which finished 2-2, believes the Birmingham-born teenager would be better served furthering his education at Anfield.

He added: "It’s not important to get the highest wages of your life in your first year, it's about getting a good education.

"I like Jerome, he's a good talent. If he wants to stay with us then he's welcome, if not then we can't stop it.

"We need young players who want to learn, if they feel it's the right place to learn then good. We can do that next season but not now. There's no rush. I cannot make decisions for them, we can only offer things and first of all education."

Sinclair may get another chance when Exeter visit Merseyside for the replay on Wednesday with Klopp set to rotate his squad.

"It's a big chance and we can show the young boys that we trust them," he continued. "It’s very important. It's a real competition against a good team. It's similar to Germany, they all know how to play football. It's a real man’s competition.

"They are excited. Anfield is a special place. I'm happy for them, hopefully we can create an atmosphere and go to the next round."

One man who will not be involved is England striker Daniel Sturridge, who will remain sidelined with a hamstring problem.

Klopp said: "No. No chance for Daniel. He has had a break in training because of some issues. He's now back training but losing time. But no team training since Newcastle. I don't know how long it is."