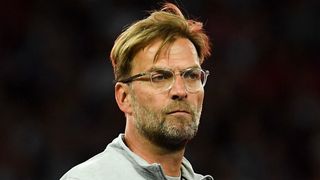 Liverpool's efforts in the transfer market are ongoing ahead of the new season, says Jurgen Klopp.

Newcomers Naby Keita and Fabinho are set to make their non-competitive debuts when Liverpool travel to Chester for a friendly on Saturday and Klopp indicated they would not be the last players to arrive on Merseyside before they being the 2018-19 against West Ham on August 11.

Keita signed from Bundesliga side RB Leipzig for a reported £52.75 million, while Fabinho's arrival from Monaco is said to have set the Reds back £40m.

When asked about Liverpool's transfer activity, Klopp told the club's official website: "Yes, I am happy.

"And the work [on new signings] is always going on, that's how it is. Why should we stop until the window is closing?

"It's all good in the moment. We will see what happens and I will not – and don't want to – say it looks a little bit better in that department or this department."

"That's what I wanted for my career - a move to a big club that knew they could count on me." : It will be an honour to wear the famous red shirt July 4, 2018

Klopp's squad will begin their preparations for the new season with a number of players who featured at the World Cup.

England stars Jordan Henderson and Trent Alexander-Arnold remain in Russia, along with Brazil's Roberto Firmino, and Klopp said he was keen to get his players back in good condition.

"If all the players are coming back and healthy from the World Cup then we have already a really, really good team – and that's the only thing I need to know," said the Liverpool manager.

"I told the boys on Tuesday that everybody has the opportunity to show up, so do it. I'm a lot of things but not blind, so that means I see what they offer – and if someone offers something special then I will realise it and we will make decisions about it."