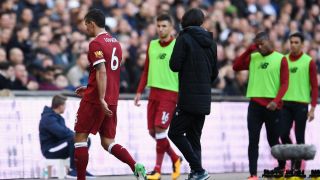 Spurs ran out 4-1 winners over Klopp's men at Wembley on Sunday, with Lovren substituted in the first half after his errors enabled the hosts to claim an early two-goal lead.

Thompson does not see how the Croatia international can now be restored to the starting line-up for the visit of Huddersfield to Anfield on Saturday, while he also cannot understand the decision to sell Mamadou Sakho in the recent transfer window.

"I would have to take [Lovren] out of the firing line," he told the Liverpool Echo. "After what he went through at Wembley, I think it's too raw at the moment to play him again so soon.

"Jurgen will have to make changes. If he doesn't have faith in Ragnar Klavan then he has to go with Joe Gomez in there alongside Joel Matip.

"We have a run of winnable games coming up and we have to make sure we're more solid at the back.

"[But, with regards to Lovren,] you can never disregard any player because you never know when you will need him.

"I still believe we sold our best defender in the summer when Mamadou Sakho went to Crystal Palace. He was a warrior and a fighter. People say he looked ungainly but you knew what you got with him."

Despite his praise for Sakho, Thompson does not think Liverpool have yet found a replacement for Jamie Carragher, who retired in 2013.

"We last had real solidity back there in the Rafa Benitez era with Jamie Carragher and Sami Hyypia as a partnership," Thompson added. "Since they left we've not had a really solid base to work from.

"As a centre-back, the three biggest things are organisation, communication and concentration. They are bywords you use as a defender.

"Carra was the last of a generation really. One of his big strengths was organising team-mates and communicating.

Problem under Rodgers was conceding goals. 4 out of the back 5 still Rodgers signings two years on that can’t be right.October 22, 2017

"If he had been playing in the 2013/14 season [when a free-scoring Liverpool finished second to Manchester City], I'm quite sure we would have won the title. He was great at ensuring people were in the right positions at the right time."