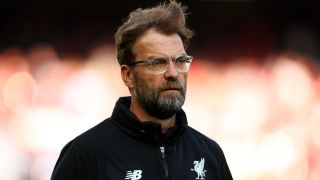 Jurgen Klopp needs to win the Premier League with Liverpool if he is to be considered among the club's great managers, according to Craig Johnston.

The former Borussia Dortmund boss has become a hugely popular figure with fans at Anfield since taking over in October 2015, thanks largely to his side's enthralling attacking style of football.

However, silverware has eluded Klopp since he arrived on Merseyside – they lost the EFL Cup and Europa League finals in his first season in charge, while they are yet to finish higher than fourth in the top flight under his guidance.

Klopp will hope to end that barren run on Saturday, when they face Real Madrid in the Champions League final, but Johnston does not thank victory in Kiev will be enough to cement his place among the top managers in the club's distinguished history.

Asked if he needed a league title to truly establish himself as a Reds great even if he wins in Europe, Johnston told Omnisport: "I think so, such is the nature of the game and Liverpool people.

"We all love beautiful football and trophies. Why? Because we've had them and we're used to them and they define us. The talking stops when you say put your medals or trophies on the table.

"To be a true great, he has to win medals. I think he's a great man and a great manager. I think he can do it personally, because he's different to all the rest we've had for a long time. Like [Mohamed] Salah, I love him dearly."

Johnston won five league titles and the European Cup in a seven-year spell with Liverpool during their dominant years in the 1980s.

The former midfielder thinks Klopp has got the players and fans believing similar levels of success are around the corner and has challenged the board to match the manager's ambition when it comes to the spending money in the transfer market.

"Liverpool are on track because the players are on fire, Klopp is winding them up, the fans are all behind them and it's back to the glory days," he said.

"Instead of naming individual players to come in, the club itself and owners have to up their game a bit to match what the players, the manager and the supporters are giving them.

"These guys are playing their hearts out and playing beautiful football but we need reinforcement and that comes from the vision from the top. That's where we have to lift our game a little because if we don't, it will be recognised.

"We have to keep bolstering the squad with quality and class. That's how you became a true champion going forward."