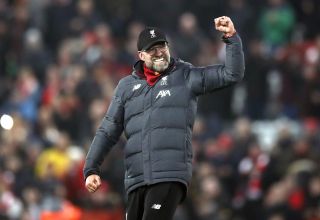 Liverpool may be having an outstanding season but manager Jurgen Klopp insists there is “no party” in his mind.

The Reds are 16 points clear at the top of the Premier League with a game in hand, needing nine more victories to guarantee a first title in 30 years, having dropped just two points so far.

They are also in the last 16 as they look to defend their Champions League crown and have a fourth-round FA Cup tie at Sky Bet League One club Shrewsbury to look forward to on Sunday.

But despite all the plaudits coming their way, Klopp said this was not the time to be celebrating.

“After the game (Thursday’s 2-1 win at Wolves) we had these little meetings where I tell the boys what I think and, to be honest, I had to remind myself to say, ‘congratulations, the result was outstanding’.

“We have no time to make assessments, we analyse our next opponent and then we go in.

“It is not that we forget what we have to do better. We are all happy with each other, obviously; in a good place, that is clear, and we were in a good place last year and the year before when we didn’t win anything.

“Anyone in the past who looked like they would win something and then stopped never got rewarded in history.

“I don’t think about (it) but I think if I look back, it makes sense after the last game, whichever that game will be as we are still in two cup competitions.”

Klopp will rest most of his first-team stars for the fourth-round trip to Shrewsbury but does not underestimate their League One hosts.

“Of course it is tough, that’s the really good thing of a cup competition,” he added.

“Shrewsbury qualified in a difficult game, having to play twice, and have been looking forward to this game since they qualified and they knew before that we would be the opponent.

“The lower-league team playing at their home ground is an advantage, hopefully the pitch will be OK – I have no idea so far about any circumstances.

“That is proper cup and I like that. Is it a test? Yes, maybe, but it is not like I test the players, it is a test in general as you play against a team who fights the fight of their life and we have to show how important the next round is to us.”