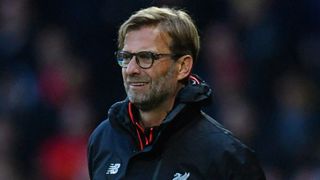 Jurgen Klopp joked that he does not need to take drugs to remain positive about Liverpool's chances of a top-four finish in the Premier League.

Liverpool's hopes of securing a Champions League berth were hit by a damaging goalless draw against Southampton last weekend, a match in which James Milner missed a second-half penalty.

The Reds remain in third but have played a game more than Manchester City and Arsenal, who are fourth and fifth, and can be leapfrogged by the former before Liverpool visit West Ham on Sunday, while the Gunners can close within a point with a win at Stoke City.

However, Liverpool boss Klopp says that pressure at this stage of the season is to be expected and the German was in a typically upbeat mood at a pre-match news conference.

"It [the match] is as significant as the last few games," he said. "If you don't win then this happens and this happens, but it's something we have to learn in life that pressure comes at the end of the season.

"It's the 100 per cent truth, we have to learn this kind of truth. The problem at the top of the table is all competitors are strong and can win games, but we are strong as well.

Klopp is adamant that there will be no sign of nerves from his side at London Stadium.

"I don't think we will be [nervous]," Klopp added. "It is easier to sit here to talk about than perform on the pitch.

"We only need one big result? Maybe not one result. We will see.

"You need to be ready for the final moments. It's about being organised and serious defending.

While Liverpool failed to beat Southampton, Arsenal were 2-0 victors at St Mary's Stadium in midweek.

"It was a completely different game when Southampton played Arsenal," Klopp said. "It was an open game. [I have] no idea why they did them that favour."