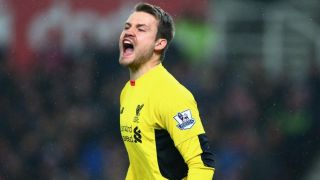 Jurgen Klopp has described Simon Mignolet as "perfect" after the goalkeeper signed a new, five-and-a-half-year contract at Liverpool.

The Belgian is committed to Anfield until 2021 after the deal was confirmed on Monday and, though news of the extension was greeted with surprise in some quarters, manager Klopp is comfortable working with the 27-year-old in the long term.

Speaking at a press conference prior to Liverpool’s FA Cup third-round replay against Exeter on Wednesday, the German reaffirmed his faith in Mignolet.

"When I came here I heard nothing negative about Simon from all the people I spoke about him with," he said.

"There’s been a lot of games since I’ve been here and Simon, as is normal for a goalkeeper, has been involved in one or another goal we’ve conceded.

"But we thought about it overall and as a package, Simon Mignolet is, for us, perfect because he’s a smart guy, he’s young enough to develop in the things he has to develop and he gives us all a good feeling when he is in the starting line-up.

"That’s really important. We thought about it and the end result was we were sure we want to work together with him for the next few years. That’s why we offered him a new contract and he took it."