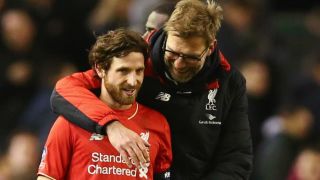 Liverpool manager Jurgen Klopp was quiet in regards to the future of Joe Allen, who is reportedly a target for fellow Premier League outfit Stoke City.

The Wales international has been linked with an Anfield exit in the off-season, with reports suggesting Stoke have put in a bid in the region £13million.

Allen, 26, has just one year remaining on his deal at Liverpool, with the club seemingly eager to cash in on the midfielder before he becomes a free agent.

When asked about Allen's future, as well as full-back Jon Flanagan - linked with a loan move to Burnley - Klopp said: "There is nothing about this and all the transfer rumours.

"We cannot comment because we couldn't do anything else all day if we did, so we shouldn't start with this.

"I feel good [about Allen]. I like the guy and I really think he is a wonderful football player: I knew this before the European Championships, I saw it during the Euros and I know it now.

"I have said all I can say about this. It is all about respecting contracts, negotiating or not - whatever - and make a transfer or not.

"But is it nothing to discuss in public but I've not seen him since the middle of May in Basle [at the Europa League final], sadly."

Allen started just eight Premier League games last season but starred for Wales at Euro 2016, helping the side reach the semi-final stage, and was named in the official team of the tournament.