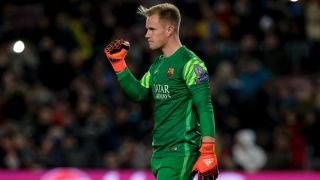 The Barcelona goalkeeper has been linked with a possible move to Anfield after failing to dislodge Claudio Bravo from his first-team spot under Luis Enrique.

Cologne's Timo Horn has also been touted as a possible option, but Klopp insists he is happy with Simon Mignolet as his number one.

"No. They're good goalkeepers, but no," he replied on Monday when asked whether bids for Ter Stegen or Horn were on the cards.

Mignolet has been criticised for his form at times this season, with the Belgium international at fault for West Brom's opening goal at Anfield in December.

Klopp also refused to offer any updates on Marko Grujic, with the 19-year-old expected for a medical on Merseyside in the early part of this week.

"You have to wait until the next press conference [for transfer updates], but that's only a few hours away," the German said.