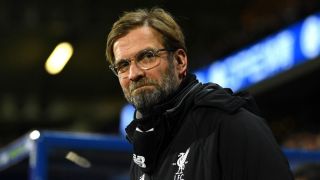 Jurgen Klopp resisted reinvesting the funds Liverpool received for Philippe Coutinho during the January transfer window due to the inflated prices of the Reds' targets.

Coutinho departed in a reported €160million deal to Barcelona at the beginning of January, having seen an anticipated move in the previous transfer window fall apart.

His exit came after the £75m arrival of Virgil van Dijk from Southampton, but Liverpool did not pursue a direct replacement for Coutinho.

They were linked with a move for Monaco's Thomas Lemar, while RB Leipzig resisted Liverpool's attempts to bring the end-of-season signing of Naby Keita forward, with Klopp explaining that the "crazy money" involved led to a quieter window.

"Yes, we could have done something," said the Liverpool boss. "But we need really the right thing.

"The right thing now, you don't get.

"The 100 per cent right thing, only for completely crazy money that really makes no sense. I'm not even sure that would work. And in the summer it looks different.

"That's how it is. To do something just to have any solution that makes no real sense, to be honest.

"People obviously ask 'bring him in' because someone is injured and you need somebody else, but then the other one is coming again and you weaken both or the third one, it makes no sense.

"In this situation, you really need to stay cool. It's more difficult when you've lost two games but you need to be serious still."