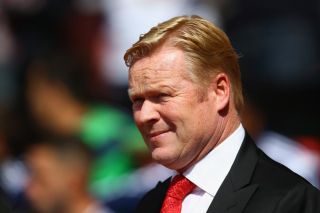 The Dutchman picked up his first Premier League point in charge of the club at St Mary's Stadium in a lacklustre game of few chances.

It was the visitors who perhaps created the better of the opportunities, with debutant Brown Ideye testing Fraser Forster one-on-one while also going close with a header.

Koeman believes a lack of pace in Southampton's performance ultimately cost them as his side failed to replicate the impressive display produced in the 2-1 defeat at Liverpool last Sunday.

"The result is better than last week but the feeling is different and that's strange in football," said the former Feyenoord coach.

"Last week we deserved much more than we got but [on Saturday] it was difficult. We didn't have the tempo to create more.

"We played West Bromwich, who played in a very good organisation - physical and strong in defence. Then you need high quality in your last pass and we didn't have that.

"Maybe in the beginning [we played] too slowly and without the high tempo to surprise them in attack. It was the same in the second half - it was a difficult one.

"In building up we like to have more tempo, sometimes it is too slow and that gives opponents the time to get organised.

"If you play the first ball forward then you have more space and we need to do that better than we did."