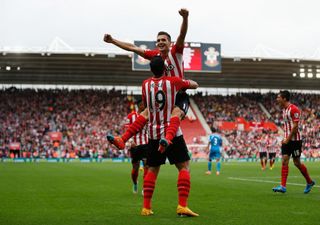 Tadic - a close-season signing from Twente - led the way as Koeman's men kept up their superb form with a scarcely believable 8-0 win over Sunderland on Saturday, scoring one and having a hand in four of the other goals.

That took Southampton's points tally to an impressive 16 from the first eight games, a haul that leaves them third in the table.

"He is always a player who gives a lot of assists and it was great that he scored his goal [against Sunderland].

"He’s a great player with great movement. I enjoy watching him very much.

"It's always easy to work with very good players and players who have a lot of qualities."

Southampton have plundered 19 league goals so far, with only Chelsea (23) having found the net more times.

And Koeman thinks the side's attacking prowess is down to giving his players more license to get forward.

He added: "We gave the midfielders the freedom to go up and score goals because we can't live from one player who scores all the goals.

"That's a quality of a team and we work on that every week.

"It isn't a surprise that now [Jack] Cork is scoring, [Victor] Wanyama is scoring and [Morgan] Schneiderlin is scoring.

"We like that and they get the freedom to do that. If you have a good rotation in the midfield it is always difficult for opponents to have good defending on that. That was an important quality in the second half."