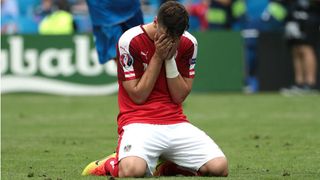 Given his team’s progress in Group F only belatedly shifted up from a snail's pace, he might consider thematically sampling another French delicacy before heading home in ignominy.

Nine wins from 10 in qualifying and the presence of Bayern Munich star David Alaba as the jewel in the country’s most gifted crop of footballers for a generation meant there was palpable optimism surrounding Austria’s prospects.

Two wins over Russia and a destructive 4-1 dismissal of Sweden stood as their finest moments on the road to France, securing a leap to 10th in the FIFA rankings and a position as the dark horses of the football hipster.

But major tournament reality has bitten hard, with neighbours Hungary stunning them 2-0 before a Cristiano Ronaldo horror show was to thank for them emerging with a 0-0 draw in Paris last Saturday.

Koller’s response to these setbacks and form and fitness quandaries offensively was, with the seemingly twitching mania of a man the wrong side of a crate of Red Bull, to jettison all that worked in qualification.

Alaba, who customarily plays in central midfield for Austria as opposed to his club position of left-back, was pushed forward to number 10 with scant return versus Portugal. Here he was perplexingly stationed as the central attacker in an experimental 3-4-3.

Iceland's fiercely well-drilled 4-4-2 under Lars Lagerback and Heimir Hallgrimsson made it feel like a foolhardy time to rip-up the playbook, and so it proved.

Birkir Bjarnason offered quite the statement of intent by churning out a set of press-ups on the field to conclude his pre-match preparations and the right-midfielder was firing from the off - picking out Gylfi Sigurdsson, whose delightful backheel was clattered against the post from 25 yards by Johann Gudmundsson.

As Koller contented himself with sticking the good lad up front, Iceland got into the schoolboy football spirit as goalkeeper Hannes Halldorsson dallied on the ball to almost let Marko Arnautovic open the scoring.

That task ultimately fell to Kaiserslautern forward Jon Dadi Bodvarsson, when he capitalised on dreadfully sluggish defending to convert a flick-on from Kari Arnason - later Iceland's second-half hero with a pair of improbable blocks to thwart goalbound shots.

Alaba's unconvincing stint up-front improved when he won a penalty for Ari Skulason yanking at his arm, but it was Aleksandar Dragovic's turn to play Ronaldo.

Same corner. Same post. Same woeful result. One of the delicious pleasure/pain parallels sport throws up to be devoured by the voyeuristic neutral.

Koller took the seemingly radical step of half-time substitutions that meant all his players were operating in the desirable positions. Unsurprisingly, Austria improved beyond all recognition.

Arnason was to thank for Iceland's lead still being intact when one of the substitutes, Alessandro Schopf, shimmied to leave him eating turf and dispatched the equaliser.

Iceland were rocking as the goals gushed between Hungary and Portugal in Group F's other cliffhanger, but they would not be cowed. The superb Sigurdsson drove forward from midfield to draw a sharp save from Robert Almer; at the other end a stoked-up Arnautovic stabbed wide.

Schopf broke through the Icelandic ranks again as Alaba pulled the strings but Halldorsson saved. It proved a symbolic "what if" moment for the cool kids whose fashionably late arrival at the Euro 2016 party proved their undoing.

The winning goal, the glory and unfettered joy would belong to Arnor Ingvi Traustason and Iceland. They play England next, although being the victims of an incredible underdog story should not spare Koller and his players their inquest.