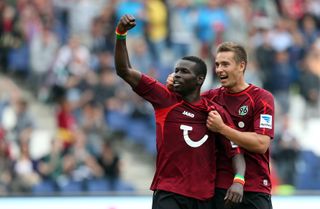 Premier League side Cardiff City are the latest club thought to be monitoring Diouf, who was the subject of interest from Stoke City in the close-season.

Senegal international Diouf has scored 32 goals in 64 appearances for Hannover, but has recently been fined by the club after failing to inform them that he would be late returning from the mid-season break in order to be with his ill mother.

However, Korkut, who took over from Mirko Slomka at the end of December, has no desire to let the former Manchester United forward leave as he attempts to safeguard Hannover's Bundesliga future.

"When we have quality, we should protect it," Korkut said. "It would not be easy to find a replacement."

Diouf can leave on a free when his contract expires at the end of the season if he is not sold in January.

However, Korkut insists that the 26-year-old is not thinking about leaving the HDI Arena.

"I do not get the impression that Mame's thoughts are somewhere else," he added.

Hannover are four points above the relegation play-off place after taking five wins from 17 games. Korkut will aim to get his tenure off to a winning start when his side resume their Bundesliga campaign at Wolfsburg on January 25.