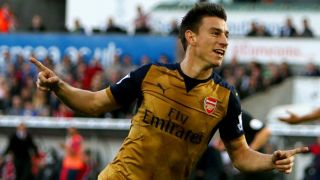 Laurent Koscielny is optimistic about Arsenal's chances of winning the Premier League this season.

Arsene Wenger's men sit joint first with Manchester City after taking 26 points from their first 12 games and Koscielny has backed the club – who have not won the top flight since 2004 – to go all the way.

"It could be Arsenal's year. If we can reproduce regularly the first 20 minutes from the Manchester United game, yes we can have the ambition of being champions," the Frenchman told Arsenal's official website, referencing October's 3-0 home win over Louis van Gaal's side before citing the 3-2 Champions League loss to Olympiacos as a cause for concern.

"But if we play like against Olympiacos, we won't even finish in the top four. We have a good squad, a lot of quality. We need to be consistent, though, to win the league. It's a marathon. Every weekend we have tough games.

"We need to have the same desire and ambition in each of them, even if we know we can't be at our best all the time. But we need to be solid defensively and efficient offensively to win 1-0 when we're not at our best."

Koscielny has faced a number of high-profile names in the Premier League since joining Arsenal from Lorient in 2010 and singled out three strikers as his toughest opponents.

"Luis Suarez was one of the best opponents I have faced, like Sergio Aguero or Didier Drogba. The good thing about the Premier League is that you have so many different strikers," he added.

"Every weekend you have to excel in a different department to play against them. After every match I have a look at my performance, the stats, and see what I have done well."

Arsenal's next challenge is a trip to West Brom, where they won 1-0 last season.