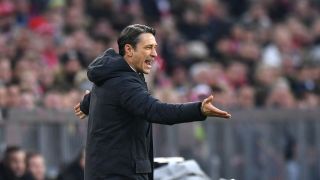 Bayern Munich president Uli Hoeness insists under-fire Niko Kovac will be in charge for the club's Champions League clash with Benfica on Tuesday.

Kovac's future is under intense scrutiny after Bayern followed up the defeat to Borussia Dortmund before the international break with a dramatic 3-3 draw against Fortuna Dusseldorf at the Allianz Arena on Saturday.

Bayern led 3-1 with 13 minutes remaining, but porous defending twice allowed Dodi Lukebakio to break free and slot past Manuel Neuer – the leveller coming in the third minute of stoppage time and completing a superb hat-trick for the Watford loanee.

The draw, coupled with Dortmund's 2-1 win over Mainz, means that Bayern are now nine points behind the league leaders.

However, Hoeness is adamant that Kovac will be in the dugout for Bayern's Champions League Group E clash in midweek.

They need just a point to qualify for the knockout stages, and Hoeness told reporters: "On Tuesday, our coach will be Niko Kovac for sure."

Thomas Muller, who added two fine goals to Niklas Sule's opener, says that fans were entitled to vent their frustrations at the end and accused his team-mates of being "reckless".

"We were whistled at the end and that is understandable," he said.

"I am still perplexed that we have conceded a goal right at the end. Maybe we are missing our 100 per cent sharpness. We are too reckless.

"We wanted to win, get three points and take a step forward."