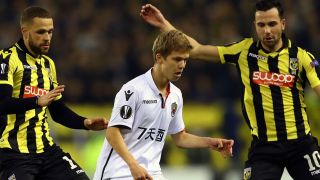 Cologne have sealed the signing of Vincent Koziello from Nice on a four-and-a-half-year contract.

Promising midfielder Koziello, a France Under-21 international, has cost the Bundesliga club a fee believed to be in the region of €3million.

The 22-year-old will link up with his new team-mates on Wednesday and could make his debut against Hamburg this weekend.

Koziello said in a statement: "[Cologne were] very zealous in their pursuit of me. We had some good talks and I felt well right away.

"I am coming to a big club in a strong league, but I also have the ambition to play as quickly as possible and to help the club achieve its goals."