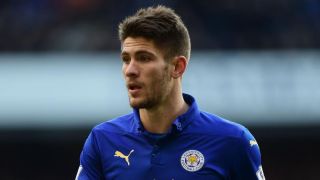 Leicester City striker Andrej Kramaric has moved to Hoffenheim on loan for the rest of the season after struggling for game time under Claudio Ranieri.

The 24-year-old arrived at the King Power Stadium for a club-record fee in January last year from HNK Rijeka and, having featured plenty under Nigel Pearson, has struggled to establish himself this term.

Kramaric has made just five appearances this season as the form of Jamie Vardy, Riyad Mahrez and Shinji Okazaki has helped Leicester to second in the Premier League.

Huub Stevens' men sit bottom of the Bundesliga but can call on Kramaric to boost their striking options ahead of Saturday's clash with Bayer Leverkusen.

"I am very excited about Hoffenheim and the Bundesliga, and I will play my part to ensure that we succeed in avoiding relegation," Kramaric told the German club's website.

Hoffenheim return for the second half of their Bundesliga campaign a point adrift of Hannover and having averaged just a goal a game in their opening 17 matches.

Stevens took over from Markus Gisdol in December and, with Hoffenheim having won just twice in the league all season, professional football director Alexander Rosen added: "We are pleased that we've been able to make this transfer happen.

"Andrej is a forward who offers a real goal threat and can hopefully provide a new impetus to our attacking game."

Ranieri revealed this month he had recommended Kramaric leave Leicester in a bid to play regularly and earn a place in Croatia's squad for Euro 2016.

In Leicester's statement, the Italian said: "Andrej has the European Championship to think about this summer, so it's important for him that he has the opportunity to play.

"He is a fantastic player and a great professional but, in this moment, we have other strikers that are playing well. I spoke with him to understand what he wants to do and a loan is a solution that works for everybody.

"We will watch him closely at Hoffenheim."