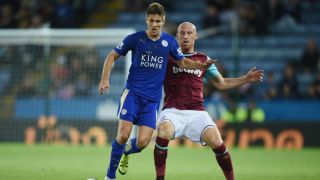 Leicester City striker Andrej Kramaric has admitted he is becoming more and more frustrated with his role at the club.

The 24-year-old arrived for a reported club-record fee of £7.5million in January after rejecting the chance to join Chelsea, opting instead for the prospect of more regular first-team football.

However, under Claudio Ranieri, Kramaric has made just one appearance in the Premier League this season and was left out of the squad again for the 2-1 win away to Norwich City - something the Croatia international is struggling to explain.

"The fans love me, they support me and they are sorry I get so few chances. I deserve to play more, it affects my confidence. I don't know what's going to happen."

Kramaric suggested Ranieri's approach to management has made it more difficult to impress than when he played under Nigel Pearson, who was sacked in June.

"Pearson and Ranieri are very different. Ranieri pays a lot more attention to the defence - whatever we do up front is good," he added.

"He's not very sociable, but rather an introverted sort of person. But the team is doing great."

Leicester, who are fifth on the Premier League table following a strong start to the season, visit Southampton on October 17.