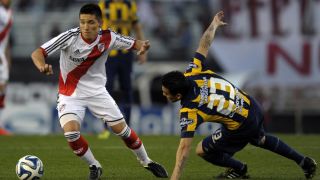 The Argentina youth international joined just hours after the La Liga giants had added Rafael Santos Borre from Deportivo Cali, who will have the forward on loan this season.

Kranevitter, 22, passed his medical on Thursday and will join Diego Simeone's squad in late December.

The defensive midfielder will feature for Copa Libertadores champions River at the Club World Cup in Japan before linking up with Atletico. His move is worth a reported €8million.

Friday's signings continue a period of change at the Vicente Calderon, which has seen the likes of Arda Turan, Mario Mandzukic, Toby Alderweireld, Miranda and Mario Suarez depart.

Jackson Martinez and former Chelsea full-back Filipe Luis are among those to have come in for Atletico, who opened their Liga campaign with a 1-0 win over Las Palmas.

Simeone's side face Sevilla on Sunday.