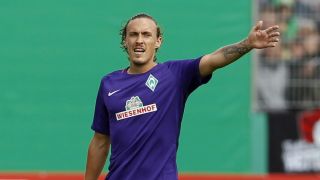 Max Kruse's Werder Bremen return in the Bundesliga will have to wait after the striker suffered knee ligament injury ahead of the opening weekend of the 2016-17 campaign.

The 28-year-old re-signed for Werder earlier this month after seven years away from the club, Kruse enjoying spells with St Pauli, Freiburg, Borussia Monchengladbach and Wolfsburg.

Werder agreed a reported €6million deal with Wolfsburg for the striker, who signed a contract until 2019.

However, his second Werder league debut is on hold after damaging the lateral ligament in his left knee in Sunday's surprise 2-1 DFB-Pokal defeat to Sportfreunde Lotte.

He will be examined by Dr Heinz-Jurgen Eichorn to learn the extent of his injury, but Kruse is expected to be out for the "foreseeable future".

"It is sad that we will probably have to make do without a key player for even longer.

"We hope that Max recovers quickly and until then we will support him as much as possible."