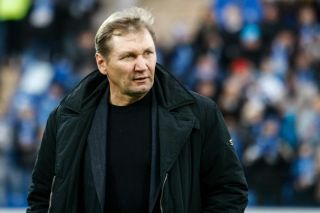 Ufa's Dmitriy Golubov was in unstoppable form as he powered four goals past Tom Tomsk in a first leg that ended 5-1 in Ufa's favour.

The 28-year-old's quartet came in just over an hour, before William added a fifth six minutes from time.

Kirill Panchenko's 56th-minute effort was scant consolation for the top-flight outfit, but goals from Evgeni Bashkirov and Pavel Golyshev in the opening 25 minutes of the second leg indicated they may be capable of a fightback.

However, Golubov was on hand once again to dash home hopes with a strike on the half-hour mark, and Tom Tomsk could only muster one more goal through Igor Portnyagin as the tie ended 6-4 on aggregate, sending Ufa into the top tier.

In the other play-off, Krylya Sovetov were unable to bounce back from their 2-0 first-leg defeat to Torpedo Moscow.

Aleksandr Salugin and Oleg Vlasov found the net either side of half-time for Torpedo in the opening counter, and the men from the capital held their opponents to goalless draw in the second to seal promotion.

Torpedo have now climbed from the fourth level of Russian football to the top in the space of just five seasons, having found themselves languishing as a result of financial irregularities.