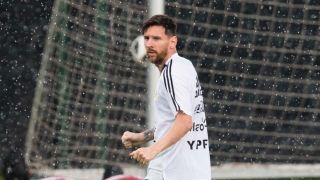 Lionel Messi and Sergio Aguero are on their way to Russia for the World Cup, where Argentina will look to end a 25-year wait for a senior international trophy.

Barcelona superstar Messi was pictured on Twitter alongside fellow forward and close friend Aguero on a 'Rolling Stones' aircraft destined for Europe.

Argentina's preparations for the World Cup have been hindered by a cancelled friendly against Israel and injuries to Sergio Romero and Manuel Lanzini.

Messi has lost four finals, including at the previous World Cup, with Argentina, whose last trophy came at the 1993 Copa America, but he appeared in good spirits en route to Russia.

Argentina begin their campaign against Iceland on Saturday, before taking on Croatia and Nigeria in their other Group D fixtures.