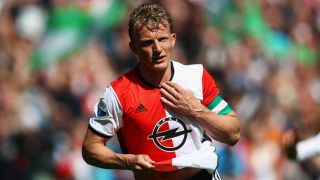 Feyenoord have been crowned Eredivisie champions for the first time in 18 years, sealing the title with a 3-1 home victory over Heracles, Dirk Kuyt scoring a hat-trick.

Giovanni van Bronckhorst's men have been top of the league since matchday one and came into the final day of the season one point clear of closest rivals Ajax, who were playing away to Willem II at the same time.

That meant Feyenoord, who missed their first chance to win the title by losing to Excelsior last week, had to match Ajax's result to be crowned champions and did just that by beating Heracles courtesy of three goals from captain Kuyt.

The home side then wrapped up the victory when Kuyt scored a penalty with six minutes to play, with Peter van Ooijen's consolation coming too late for Heracles. As a result, Europa League finalists Ajax's 3-1 win over Willem II was in vain.

It is Feyenoord's 15th overall league title and their first since 1998-99, manager Van Bronckhorst ending the streak in only his second full season, his first having seen the club win the KNVB Cup.

Nicolai Jorgensen has been Feyenoord's star performer after signing from Copenhagen, with 21 goals and 11 assists in the league, while Jens Toornstra has chipped in with 14 goals and nine assists.

Ajax lose out on the title on the final day of the season for the second straight campaign after suffering a nightmare collapse 12 months ago.

They went into the final weekend of 2015-16 leading the league, only to lose out on the title to PSV as they failed to beat De Graafschap and now they have fallen just short again.

Feyenoord's success means five different Dutch teams have won the title in the last nine seasons – AZ, Twente, Ajax and PSV being the others.