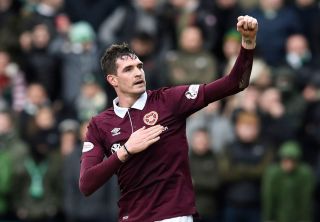 Kyle Lafferty wants to kick-start his career back at Hearts after seeing his Rangers return flop.

The Northern Ireland striker is on the lookout for a new club after being axed by Steven Gerrard last month.

Lafferty returned to Ibrox from Hearts 12 months ago but failed to recreate his impressive Jambos form back in Glasgow as he scored just six goals in 30 appearances.

Now he says his first choice would be to head back to Gorgie as he looks to resurrect his fortunes.

However, there is likely to be further frustration for the 31-year-old.

Hearts boss Craig Levein – who has re-signed Lafferty’s ex-Ibrox team-mate Steven Naismith and added his international colleague Conor Washington to his squad this summer – has already made it clear he has no plans to offer Lafferty a deal.

However, speaking to the Daily Record, the frontman said: “I’m gutted it didn’t go well (at Rangers) but I don’t have a bad word to say about Steven. He gave me the opportunity to come back to the club.

“I’m gutted for myself that I didn’t make it work but I’m more gutted for my daughter Sienna that she won’t see me wear the Rangers shirt.

“I’d like to stay in Scotland but I don’t know what to do.

“I’ve enjoyed playing abroad, I enjoy that type of football and the lifestyle of being abroad as my family would enjoy that but it’s not about just going somewhere hot and sunny.

“My preference would be to stay in the Premiership and my ideal move would be to go back to Hearts as I enjoyed my time there.

“People don’t realise how big a club they are but they are a terrific club who’ve signed Conor Washington, an international team-mate of mine. He’s someone who will score goals and that’s what Hearts need right now.

“I need to sit down and assess things and decide my next step. We’ll see what the next chapter is.”