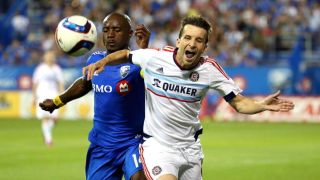 The LA Galaxy may not have had a busy day drafting players Thursday, but made two additions to its team, bringing back free-agent forward Mike Magee , while also landing midfielder Emmanuel Boateng.

Magee was a member of the MLS Cup-winning Galaxy teams in 2011 and ’12 before being traded to the Fire for current Galaxy left back Robbie Rogers. Magee went on to have his best season in ’13, culminating in an MLS MVP award with Chicago.

“Mike has shown that he is one of the most versatile and effective players in our league,” Galaxy Head Coach and General Manager Bruce Arena told LA Galaxy.com. “He is familiar with our club and will be a key part of our team on and off the field. We look forward to Mike joining to our roster.”

The veteran forward has played for three teams in his 13-year career – the New York Red Bulls, Galaxy and the Fire. He has tallied 64 goals and 34 assists over that span, with 21 of those goals coming in his MVP season.

While Magee has the bigger name, the Galaxy also landed 21-year-old midfielder Boateng, who had been with Swedish top-flight club Helsingborgs IF since 2013. Boateng, who spent his high school years in California and attended college at the University California, Santa Barbara, was considered well-regarded prospect before he departed for Sweden. He won the MVP of the Milk Cup, an international youth tournament, in ’11.

"He's a young and exciting player who offers a lot of pace to our team. He's left footed and predominantly a left-sided attacking player who gives us something that we don't have," Arena told the club's website. "With his speed, it's going to help us whether he's a full-time player or a part-time player, his speed is going to be a valuable part of our attack."

The Galaxy did not have a draft choice on Thursday, after they traded their pick to Colorado for targeted allocation money. Colorado then sent the pick to Chicago in a larger deal, where it was used to select Jonathan Campbell, a defender from the University of North Carolina.