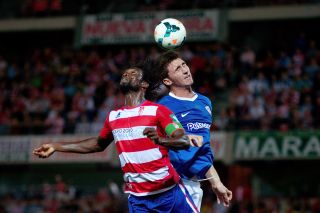 The 26-year-old Moroccan striker notched a penalty eight minutes into the second half after Bilbao's Ander Herrera's high boot caught Yacine Brahimi inside the box, while El-Arabi doubled the home side's lead on the hour-mark with a header from a corner.

The victory was Granada's first in La Liga since the opening weekend of the season and took the Andalusians out of the relegation zone, up to eight points and 12th on the table, while Bilbao remain fifth as their inconsistent run continued.

In a fairly dull first half on Monday, Granada's Argentine playmaker Diego Buonanotte produced the game's first serious goalscoring chance when his shot was tipped over by Bilbao goalkeeper Gorka Iraizoz.

The hosts' goalkeeper Roberto Fernandez made two fine stops in the opening half, denying Ibai Gomez and Markel Susaeta.

Just after half-time, Granada broke their scoring duck in September when El-Arabi converted from the spot.

A 60th-minute counter-attack set up the home side's second goal at the Estadio Nuevo Los Carmenes with El-Arabi teeing up Buonanotte for a shot, which deflected out for a corner.

While El-Arabi was denied his hat-trick soon after thanks to a top save from Iraizoz, Granada held on for victory as the visitors missed the opportunity to break into La Liga's top four.

Bilbao sit two points behind Villarreal, who lost 1-0 to Real Betis on the weekend.