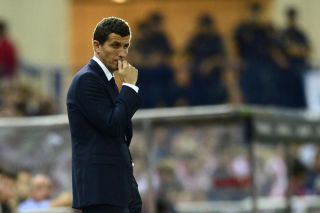 In an encounter low on excitement and goalscoring chances, both sides demonstrated just why they occupy the lower reaches of the Spanish top flight in a disappointing contest at Estadio El Sadar.

The result leaves Valladolid only a point above the relegation zone in 17th, while Osasuna are two points further ahead in 16th.

Javi Gracia's hosts almost opened the scoring in the ninth minute, midfielder Cejudo striking the woodwork with a speculative effort from distance.

Striker Oriol Riera and Cejudo wasted further chances for Osasuna in the first half, before Valladolid midfielder Victor Perez crashed a shot against the post early in the second.

Cejudo was then denied by a wonderful save from Valladolid goalkeeper Jaime in the 50th minute.

But seven minutes from the end, Javi Guerra spurned the best opportunity of the game for the visitors as his effort across the face of goal was brilliantly kept out by Osasuna keeper Andres Fernandez, whose efforts ensured the match finished goalless.