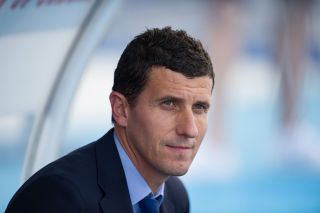 An early goal from Emiliano Armenteros set the hosts on their way on Friday, before Oriol Riera doubled their lead just after the half-time break at Estadio El Sadar.

And, despite Edu Albacar's late penalty, Osasuna held on to move up to 18th in the Spanish top-flight, while Elche sit one place above them just outside the relegation zone on goal difference.

Despite their poor points tally, Elche came into the game in superior form to their opponents having drawn three matches in a row after an opening-day defeat to Ray Vallecano.

But with just 16 minutes on the clock, Fran Escriba's men were behind as Armenteros made the most of a hashed clearance to slot the ball home on his left foot.

Elche duo Carlos Sanchez and Albacar shared the best of the half's remaining chances but neither could score, and they were punished for their wastefulness as proceedings got back under way.

Former Barcelona youth prospect Riera was the scorer, lashing in his own rebound after a delightful through-ball from Jordan Loties had presented him with an opportunity.

Elche worked admirably to get back into the game in the aftermath, though an audacious Javi Marquez effort from the halfway line that snuck over the bar perhaps best summed up their desperation.

They were handed a lifeline in 88th minute when Marc Bertran handled in the box and Albacar slotted the resulting spot-kick home but it was to no avail as Osasuna held their lead.