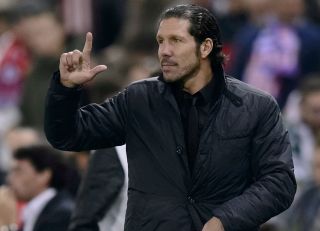 Diego Simeone's side are one point behind leaders Barca in the league table after the opening 10 matches and will be confident of keeping the pressure on at the top when they meet Granada, a team they have never lost to.

Celta Vigo – managed by former Barcelona player and coach Luis Enrique – come into their clash with the champions 48 hours before Atletico are in action brimming with confidence after a 5-0 victory over Malaga on Saturday.

It was only Celta's second win of the campaign and lifted them out of the bottom three, but they face the daunting task of trying to end Barcelona's unbeaten start to the season in all competitions.

Gerardo Martino's side notched their ninth league win of the campaign with a 2-1 Clasico victory over Real Madrid at the weekend and have not lost in Galicia on their last three visits.

Real will look to return to winning ways following the defeat at Camp Nou when they host Sevilla on Wednesday.

An upset looks unlikely as Real have only lost once at home in the league in 36 matches and Sevilla have not won at Santiago Bernabeu in the league since 2008.

However, Unai Emery's side travel to Madrid seven games unbeaten in all competitions, a run that was extended with a 2-1 success over Osasuna on Sunday.

Things are not as settled as Valencia after a second consecutive defeat in the league to Villarreal left Miroslav Djukic's men sit in mid-table. Djukic, though, will be confident of returning to winning ways when they face bottom club Almeria.

Almeria are yet to win in 2013-13 and are on a run of five defeats that sees them four points adrift at the foot of the table. To make matters worse, Almeria have not beaten Valencia in Liga action since January 2008.

Two sides that have started the season well – Villarreal and Getafe – meet at El Madrigal on Thursday with the hosts in buoyant mood following their 4-1 win over Valencia.

There will be a first meeting between Athletic Bilbao and Elche, while Espanyol and Malaga will look to put heavy weekend defeats behind them when they meet at Estadi Cornella-El Prat.

Strugglers Real Betis will hope to ease the pressure on head coach Pepe Mel with a first win in four matches when they face Levante.

Elsewhere, Real Valladolid and Real Sociedad meet on Wednesday after both sides recorded 3-0 victories at the weekend, while Osasuna take on Rayo Vallecano.