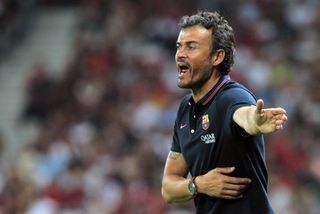 The former Roma and Celta Vigo coach will take charge of the 22-time Spanish champions in La Liga for the first time on Sunday, having been drafted in to improve upon an underwhelming campaign under predecessor Gerardo Martino.

With Barca only winning the Supercopa de Espana last term, the 44-year-old has been tasked with bringing titles back to the club he spent eight years at and will have a wealth of new talent at his disposal.

Luis Suarez's biting ban rules him out until October while Thomas Vermaelen (hamstring) and Marc-Andre ter Stegen (back) must also wait for their competitive debuts but pre-season arrivals Ivan Rakitic, Claudio Bravo and Jeremy Mathieu could all feature.

Having been named Carles Puyol's successor as captain, Xavi feels Luis Enrique has the know-how and experience to ensure Barca win a major trophy this season - an achievement the former Spain international feels should be guaranteed.

"We have our own way of playing. Luis Enrique knows this house well and is quite clear on what the system is. When you see the team training, everything looks good and I think that all will be fine," the 34-year-old said on Friday.

"Of course, that has to be proved in the matches. We've made some good signings and the general feeling is very positive. The team management is clear on what it wants.

"He knows the club really well and knows that the level of demand is at its highest.

"We know that last year we didn't fulfil the objectives. Every year Barca deserves to win at least one major trophy."

Last season marked Elche's return to La Liga for the first time in 24 years and they ensured consecutive top-flight campaigns - a feat not achieved since 1977 - by finishing a point clear of the drop zone in 16th.

Fran Escriba has also been active in the transfer market over recent months, bringing in Mario Pasalic and Przemyslaw Tyton on loan from Chelsea and PSV respectively, making up for Colombia international Carlos Sanchez's departure to Aston Villa.

Escriba, who agreed a two-year contract extension during the close-season, will hope his side can spring an upset in Catalunya, with Barca potentially missing both Neymar and Pedro.

The Brazil international suffered an ankle sprain in midweek and could miss Sunday's fixture while Pedro is suffering with gastroenteritis.

Pedro scored in the corresponding fixture last term, a 4-0 victory, with Elche holding Barca to a goalless draw at the Estadio Manuel Martinez Valero later in the season.