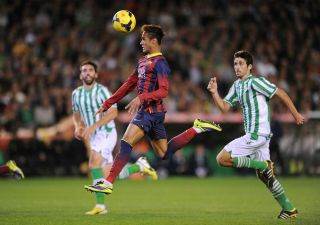 Beleaguered Betis have claimed only five league wins all season and are eight points adrift of safety ahead of their daunting trip to Camp Nou.

Gabriel Calderon's side will be heavy underdogs against a Barca team whose title chances have been drastically improved by a run of four straight league wins, including a dramatic 4-3 Clasico triumph at arch rivals Real Madrid.

Barca still trail Atletico Madrid by a point, and were held to a 1-1 draw by the leaders on Tuesday in the first leg of a UEFA Champions League quarter-final.

Diego Simeone's men, who have won their last five league games, are also in action on Saturday against a Villarreal side without a win in four against Atletico.

Real's defeat to Barca was followed by another setback at Sevilla and, although Carlo Ancelotti's men then thrashed Rayo Vallecano 5-0, Spain's third-placed side will be wary of succumbing to a further slip-up at Real Sociedad.

Sociedad have lost just twice at Anoeta in the league this term and stunned Barca in Februrary with a 3-1 win.

Jagoba Arrasate's men are six points adrift of Athletic Bilbao in the race for the final Champions League qualifying berth.

Defender Alberto De La Bella is targeting a strong result against Real after a 3-3 draw in the corresponding fixture last term helped them earn a spot in Europe's premier club competition.

"Last season we managed a draw and we'll have to be mindful of that game," De La Bella told Sociedad's official website. "We were playing for fourth place and we achieved a point that helped us reach the Champions League qualifiers.

"This time around, we have to keep going as we have and be aggressive. We have to concede as little as possible against them, because they so often seize on their opportunities.

"We must stand up to them and make the most of what we have, because teams like Real Madrid are very unforgiving."

Bilbao visit Levante on Monday as they look to strengthen their grip on fourth spot while Sevilla, who only lead Sociedad on head-to-head record following a defeat to Celta Vigo last weekend, host Espanyol.

Second-bottom Osasuna host Almeria, with the winner potentially moving out of the bottom three.

Real Valladolid leapfrogged that duo with victory over Almeria last weekend, but face a much more difficult task this time around against Valencia.

Elsewhere, Elche meet Getafe in a game that is also likely to have implications on the relegation fight, fellow strugglers Vallecano take on Celta and Malaga face Granada.