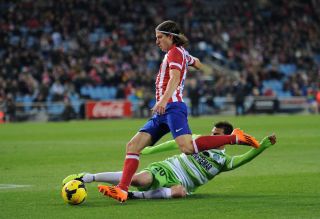 And the gloom at Coliseum Alfonso Perez may soon be heightened by an Atletico side who head La Liga following a superb season so far that has seen them lose just three league games.

However, Diego Simeone's men have not beaten Getafe away from home since 2008 - a sequence they will need to remedy to make sure they retain pole position in an enthralling three-way title race with holders Barcelona and rivals Real Madrid.

Both Barca and Real also face sides fighting for their top-flight lives, with Gerardo Martino's defending champions taking on a Granada side sitting just three points above the drop zone, having lost three consecutive games.

Barca will be heavy favourites to claim the points at Estadio Nuevo Los Carmenes, and will be eager to bounce back from their midweek UEFA Champions League exit at the hands of Atletico, missing out on a seventh consecutive semi-final appearance in Europe's top club competition.

Carlo Ancelotti's side led 3-0 from the first leg, but only just escaped from Signal Iduna Park with a 3-2 aggregate triumph on Tuesday following a disappointing showing in Germany.

Cristiano Ronaldo was left on the substitutes' bench against Dortmund with a knee injury, but the Portuguese is expected to return as Real aim to reproduce the kind of form they showed in November's 5-0 thrashing of Almeria.

Bottom club Real Betis have had little to cheer this season, however, Gabriel Calderon's men will hope to boost their slim chances of survival when they meet rivals Sevilla in one of the most intense derbies in Spanish football.

Sevilla - six points behind Athletic Bilbao in the race for the the final UEFA Champions League spot - have already inflicted considerable pain on Betis this season, beating them on penalties in the UEFA Europa League last 16.

Betis will need to no further incentive to avenge that heartbreak and hand the advantage in the race for Europe to Bilbao, who face Malaga on Monday.

Real Sociedad visit Celta Vigo hoping to keep their slim hopes of a return to the Champions League intact, and Villarreal can close in on a Europa League spot by overcoming Levante.

Elsewhere, 16th and 17th meet when Osasuna and Real Valladolid clash in a crucial battle at the bottom of the table on Friday, while Elche and Rayo Vallecano will be aiming to edge closer towards safety on Sunday at Valencia and Espanyol respectively.