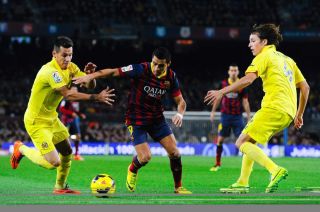 The assistant to Pep Guardiola during a period of glorious success at Camp Nou, Vilanova subsequently took over as first-team coach and led the Catalan giants to the Liga title with a club-record haul of 100 points in 2012-13.

Having battled ill health and spending time in hospital during his brief reign, Vilanova stood down in July 2013 to be replaced by Martino.

His condition then worsened earlier this month and Barca released a statement on Friday confirming Vilanova's passing at the age of 45.

Players from both sides will wear black armbands during Sunday's match, which is set to be preceded by a minute of silence in Vilanova's memory.

Matters on the pitch will be secondary in light of the news, though Barca can follow up last weekend's 2-1 win over Athletic Bilbao, which ended a run of three straight defeats in all competitions.

Martino's side are four points adrift of Liga leaders Atletico Madrid, with four rounds of fixtures remaining, while Real Madrid are a further two points back but boast a game in hand on the top two.

Lionel Messi scored the winner on Sunday as Barca came from a goal down to maintain their slim title hopes.

However, former Barca forward Giovani dos Santos, who now plies his trade for Villarreal, believes harsh assessments of his former team-mate has been over the top.

"Messi is the best in the world. Everything that's been said is exaggerated and out of control," Dos Santos told Sport.

"You can't trust the form of Barca. The league is the only trophy they have left and they are going to throw everything at it."

Villarreal also have plenty to play for going into the closing weeks of the season, as they look to close the two-point gap to sixth-placed Real Sociedad in the chase for a UEFA Europa League place.

Martino could welcome back Javier Mascherano from a calf injury after he and Sergio Busquets returned to training, but Neymar, Gerard Pique, Jordi Alba and Carles Puyol remain sidelined.