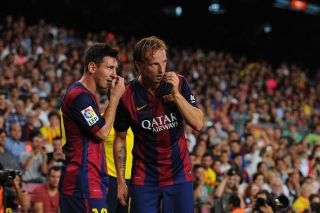 Luis Enrique enjoyed a victorious league debut in charge of the club he spent eight years at as a player, with a Lionel Messi brace helping Barca see off Elche at Camp Nou on Sunday.

Munir El Haddadi also got on the scoresheet in a 3-0 triumph that saw Claudio Bravo, Jeremy Mathieu and Rakitic make their Liga debuts for the club.

Marcelino Garcia Toral's Villarreal have also enjoyed a positive start to the season, seeing off Levante 2-0 on Sunday and moving into the UEFA Europa League group stages at the expense of Astana.

Rakitic looked impressive in Barca's midfield against Elche but is keen to remain grounded ahead of a clash with last season's sixth-placed side.

"I'm glad people appreciate the work I'm doing but we've only played one league game - there's a long season ahead of us," Rakitic explained ahead of the trip to El Madrigal.

"I'll be contributing everything I've got and I'll be working as hard as I can.

"I'm more motivated than ever to continue giving the best I can."

Although Barcelona completed a league double over Villarreal last season, ex-Sevilla man Rakitic expects a strong test against a side led by Marcelino, one of his former coaches at Sevilla.

"It's a team I know quite well from inside, we know what Villarreal are like as a team. They are very strong," the Croatian added.

"They work on all aspects of the game and I know Marcelino is a very hard-working manager.

"He always gets 100 per cent out of his players so we need to work hard as we know it's going to be a very difficult game."

Marcelino will hope two former La Masia graduates, Giovani dos Santos and Javier Espinosa, can prove a point against their former employers, while recent recruit Denis Cheryshev will be eager to build on his goalscoring debut.

The former Real Madrid man was on target against Levante and recently paid tribute to Marcelino's impact - having arrived from the Santiago Bernabeu in June.

"I'm very happy here, the coach is showing a great deal of confidence in me," Cheryshev told the Villarreal's official website.

"I want to grow as a player here, score goals and achieve big things."

Rafinha and Neymar both returned to full training with Barca on Friday, although the latter is yet to be given the all-clear to return from an ankle injury.

Thomas Vermaelen (hamstring) and Marc-Andre Ter Stegen (back) remain sidelined, while Ikechukwu Uche and Bojan Jokic (both knee) look set to miss out for Villarreal.