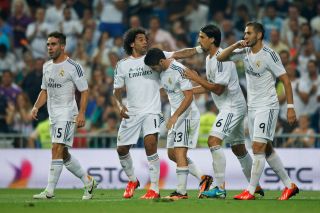 Betis opened the scoring through Jorge Molina in a closely-contested first half after excellent work by Cedric Mabwati, but the lead did not last long as Karim Benzema converted Marcelo's cross.

Both sides enjoyed a number of chances as Cristiano Ronaldo and Nosa Igiebor both struck the woodwork, but in the end it was Madrid who sealed all three points as Isco headed Marcelo's whipped delivery into the goal in the 87th minute.

There were few surprises in Ancelotti's team selection as new signings Daniel Carvajal and Isco slotted straight into the line-up, although Diego Lopez was given the nod in goal ahead of Iker Casillas.

Betis, who signed a total of 13 players during the close-season, had four new faces in their first 11 as Stephan Andersen, Joan Verdu, Cedric and Juanfran all made their debuts.

Madrid started impressively and had a goal disallowed two minutes in. Betis replied instantly with a chance of their own as Jorge Molina met Nacho's left-wing cross with a well-timed header, but Lopez was up to the challenge and parried it away.

The forward came out on top the next time the duo came head to head, however.

Cedric, who reportedly cost just €1.20 from Numancia, burst through the centre and past Sergio Ramos before squaring a pass into the danger area for Molina to prod into the goal as Betis took a shock lead.

Ancelotti's side had another goal ruled out for offside just after the 20th minute, but they did eventually draw level midway through the first half as Benzema tapped in Isco's low cross from the left.

Pepe Mel's Betis could have added a second 10 minutes from half-time as Nosa Igiebor headed Verdu's corner on to the crossbar, while Carvajal was lucky not to concede a penalty a few moments later as he knocked Cedric to the ground and the score remained 1-1 at the break.

The second half began in a similar manner to the first as Madrid attacked from the off and Ronaldo rattled the crossbar with a side-footed effort after pouncing on a loose ball just inside Betis' area.

Madrid's ferocious start to the second period continued and Benzema was the next to go close. Marcelo, who impressed down the left before half-time, fizzed a low delivery in towards the goal area but the France striker could not hit the target from an acute angle.

With attacks in open play giving Madrid little success, they were denied a penalty when Ronaldo's cross appeared to strike the arm of Nacho, while the Portuguese star's shot five minutes later was well saved by Andersen after Mesut Ozil's through ball.

Ancelotti introduced Alvaro Morata from the bench in an attempt to change things in attack, but it was Isco who found the winner as he headed Marcelo's cross into the net from the centre of the area with four minutes left.