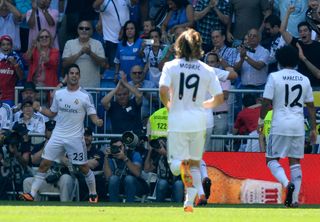 The former Malaga man broke the deadlock midway through the first half, with Cristiano Ronaldo, who appeared deflated as talks over a new contract rumble on, heading home his first of the season just before the break.

Isco netted again in the second half, although Ibai Gomez grabbed a deserved consolation goal for Athletic, who were dogged throughout.

With Gareth Bale's expected move still not confirmed before the early kick-off, Carlo Ancelotti made just one change to his side that narrowly beat Granada on Monday as Sami Khedira added physicality to the midfield in Mesut Ozil's place.

Ander Herrera notably found himself among Athletic's substitutes, with the midfielder widely reported to be on the brink of a €36million move to Manchester United.

The hosts were in the ascendancy early on and carved out the game's first real chance 15 minutes in as Karim Benzema latched onto Sergio Ramos' lofted pass, but saw his weak chipped effort fall straight into Iago Herrerin's arms.

Ronaldo tested the goalkeeper with a fierce drive after 24 minutes and Ramos headed the resulting corner wide, as Pepe just missed out on a tap-in at the far post.

They did not have to wait long to break the deadlock, however, as just two minutes later Benzema chipped a masterful ball over Athletic's defence and into Isco 15 yards out, who took a touch and tucked home.

After seeing Benat fire a free-kick just wide for Athletic on the half-hour, Benzema went close twice late in the half, first heading over and then seeing an effort from eight yards blocked after a neat one-two with Alvaro Arbeloa down the right flank.

But it was Ronaldo who doubled the advantage, stealing in unmarked to get on the end of Angel Di Maria's whipped free-kick and plant a firm header to the helpless Herrerin's left.

Madrid's tempo dropped somewhat after half-time, but they retained a threat, with Herrerin called into action 10 minutes into the second half, racing off his line to deny Benzema as the Frenchman charged towards goal.

Ronaldo looked buoyed by his goal and fizzed a free-kick towards the corner, but Herrerin plunged to his right and kept the ball out with a fine save.

And the hosts' pressure once again paid off after 72 minutes as Benzema took the ball into the penalty area, before chipping back to Isco on the edge of the box. The Spain international lashed a right-footed effort across goal, which deflected off an Athletic defender and looped into the opposite corner.

Ibai put Athletic on the scoresheet with 10 minutes to play, smashing home after Andoni Iraola had burst down the right flank and cut the ball back to Markel Susaeta, who miscued his effort into the half-time substitute's path.

But it proved to be only a consolation as Madrid comfortably closed out their third league win from as many games this season.