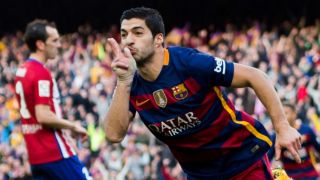 Champions Barcelona came from behind to beat nine-man Atletico Madrid and move three points clear of their nearest rivals at the top of La Liga.

Koke stunned Camp Nou with a sharply dispatched 10th-minute opener on Saturday, and that advantage remained until Lionel Messi intervened with half-an-hour played.

The Barca superstar produced a clinical finish to crown a sweeping move involving Jordi Alba and Neymar before Luis Suarez slotted past Jan Oblak to establish an advantage before half-time.

Atletico's task became a steeper one when Filipe Luis saw red for a rash challenge on Messi and Diego Godin would also leave the action early in the 65th minute, collecting a second yellow card for fouling fellow Uruguay international Suarez.

Villarreal pulled level on points with third-placed Real Madrid thanks to a 1-0 win over Granada.

Bruno's 65th-minute penalty was enough to improve upon back-to-back draws from their previous Liga outings.

Highly rated forward Inaki Williams headed the only goal after 24 minutes to give Athletic Bilbao a 1-0 victory at Getafe, while Malaga were also winners on the road and moved into the top half of the table courtesy of a 2-1 triumph over Eibar.

Juanpi opened the scoring on the stroke of half-time and Roque Santa Cruz coolly converted a one-on-one in stoppage time, before Borja Baston grabbed an even later consolation.

Ruben Castro hit back six minutes into the second half but Betis could not avoid a 2-1 loss.