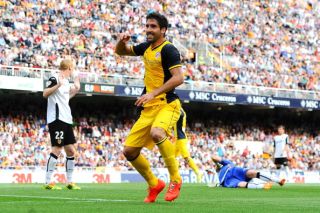 Diego Simeone's side remain at the top of the table after another hard-fought victory, with Garcia's 18th strike of the season in all competitions proving to be the difference.

Much of Atletico's success has been down to their resolute defence – they have conceded a league-low 22 goals in 35 games – and again they proved too tough for their opponents to break down.

Atletico have now conceded just one goal in their last nine league matches, with the result ending Valencia's scoring run in 25 successive La Liga matches at the Mestalla.

Garcia's 43rd-minute goal – a smart header from Gabi's cross – should have been added to by Diego Costa when he was sent clean through.

The forward was denied and Valencia rallied late, with Jonas seeing a header blocked, but Atletico held on for all three points despite Juanfran receiving a straight red card in second-half stoppage time for a lunge at Pablo Piatti.

Atletico – who travel to Chelsea for the second leg of their UEFA Champions League semi-final on Wednesday – now need just six more points from their remaining three matches to win the title.

The importance of breaking Atletico's La Liga drought was underlined by Simeone, who picked nine of the players who started in Tuesday's goalless Champions League draw against Chelsea.

Valencia started well, with Paco Alcacer firing wide after a smart turn, while at the other end, the recalled David Villa almost provided a spectacular opener with an instinctive curling shot that just missed the target.

Filipe Luis had a fierce strike deflected wide and Atletico started to exert their dominance, with Koke volleying into the ground and over Vicente Guaita's goal after Costa evaded two players to create the chance.

And they struck just before half-time, when Garcia beat two defenders and Guaita to Gabi's superb cross, heading into the right corner for his 10th league goal of the season.

Atletico should have doubled their lead just after the break when the prolific Costa was played in by Koke, but he shot straight at Guaita.

A far-post header from Jonas looked destined to find the bottom corner, but Diego Godin was in the way to thwart him, and Sofiane Feghouli saw a blistering effort flash just wide.

Costa had another great chance to score but was denied by Guaita after trying to round the goalkeeper, and Atletico's desperation to maintain their lead saw Juanfran scythe down Piatti in the dying stages.

It did not impact the result, though, as Atletico won a league match at Valencia for the first time since 2003.