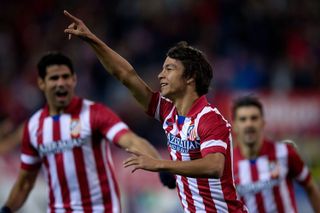 Oliver Torres, on his full league debut, got the hosts off to a flying start when he netted Atletico's fastest ever league goal after just 13 seconds.

Diego Costa claimed his 13th goal of the season in the 65th minute, before Gabi completed the rout in stoppage time.

The win meant Diego Simeone's side bounced back in style following their defeat at Espanyol last week, while for Betis it was their third successive defeat, a result that left them in the relegation zone.

Elsewhere, Villarreal consolidated their place in fourth with a 4-1 home thrashing of Valencia.

Giovani dos Santos made it 3-0 four minutes after the break, with Ricardo Costa pulling a goal back for Valencia in the 63rd minute.

Dos Santos had the final say six minutes from time as Villarreal maintained their unbeaten home league record this season, while Valencia slipped to 11th.

They were leapfrogged by Real Sociedad and Sevilla, who both enjoyed home victories on Sunday.

Jose Angel sealed the win in the 55th minute as Almeria lost for a fourth time in a row, with the bottom side the only team in the division yet to taste victory.

And Sevilla beat a 10-man Osasuna 2-1 thanks to goals from Ivan Rakitic and Jairo Samperio, as they moved inside the top half of the table.