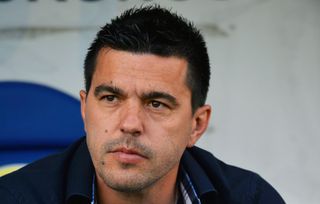 The Madrid-based club parted company with former coach Luis Garcia earlier this month, but new boss Cosmin Contra's arrival had initially failed to have the desired effect with just one point from his first three matches in charge of Getafe.

Coming into the game second from bottom in the table, Getafe's miserable run came to an end on Sunday as they came from behind to win at the Mestalla Stadium.

It looked like being yet another disappointing day for the visitors when Eduardo Vargas gave Valencia a sixth-minute lead but two goals in as many minutes midway through the first half from Angel Lafita and Ciprian Marica put Getafe in front.

Pedro Leon then made the game safe for Contra's men three minutes from time, before the hosts saw Jeremy Mathieu dismissed for a second bookable offence in the closing stages as Getafe moved up to 16th in the table.

Their win sent them a place and a point clear of Real Valladolid, who claimed a crucial victory of their own earlier in the day by beating fellow-strugglers Almeria 1-0.

Manucho's fifth-minute goal proved the difference, while Almeria saw Marco Torsiglieri sent off 15 minutes from time as they dropped into the bottom three.

They were joined by Osasuna, who drew 1-1 with Real Sociedad; Oriol Riera's 59th-minute equaliser earning them a point after their local rivals had gone ahead through Gonzalo Castro.

Elsewhere, Villarreal's hopes of qualifying for next year's UEFA Champions League were dealt a blow when they were held 1-1 at home by struggling Elche.

The visitors went ahead after 31 minutes thanks to Damien Suarez's penalty and although the home side levelled a minute before half-time through Jonathan Pereira, they were unable to force the winner that would have seen them climb into fifth.