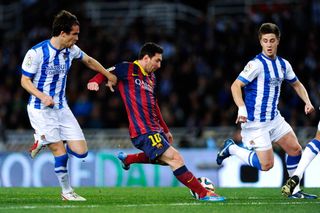 Adriano fired Barca into an early lead at Camp Nou on Saturday, but it was Messi who stole the show as he scored twice to overtake Athletic Bilbao legend Telmo Zarra's record of 335 goals at a single Spanish club.

Messi netted Barca’s second with a delightful chip in the 36th minute, before setting up Alexis Sanchez just after half-time.

Pedro scored their fourth with an easy finish following Cesc Fabregas' squared pass and Messi got his second of the night in the 68th minute, confidently slotting into the bottom corner from just outside the area.

Second-half substitute Neymar completed the rout in the 89th minute with an incredible drive from 25 yards, and Barcelona moved ahead of Atletico on goal difference in the table, with both having 60 points.

Atletico went into their game at home to Real Valladolid on the back of three consecutive defeats in all competitions, with Real Madrid beating them twice in the Copa del Rey semi-finals and Almeria emerging 2-0 victors in the league.

Valladolid offered no such resistance, however. Atletico were 2-0 up within four minutes as Raul Garcia first produced a good finish from Gabi’s short free-kick and Diego Costa then lobbed Diego Marino for his 21st league goal of the season.

Uruguayan defender Diego Godin made amends for two previous misses by heading in the third with 16 minutes to go, sending them three points clear of Real Madrid, who face a short trip to Getafe on Sunday.

A 1-0 win at home to Almeria extended Levante's unbeaten run in La Liga to six games and subsequently moved them up to seventh, above Valencia and Unai Emery's Sevilla, who play each other on Sunday.

David Barral scored the game's only goal in the 62nd minute and despite the defeat, Almeria remain four points above the relegation zone thanks to the defeats suffered by Valladolid and Rayo.

There was controversy in the final match of the day as Villarreal's match against Celta Vigo at El Madrigal was briefly suspended after a smoke bomb was thrown on the pitch.

The visitors were leading thanks to Fabian Orellana's 83rd-minute header when the referee halted play as a smoking object landed just outside the Celta penalty area.

Upon landing on the pitch, the canister caught fire and subsequently left scorch marks on the grass as smoke billowed out from both ends.

Fans were instructed to leave the stadium as supporters and players alike rushed to escape the smoke, covering their eyes in the process.

Play resumed almost 25 minutes later after the object was cleared and the players re-entered the pitch to play the final few minutes, with Celta subsequently scoring a second to win 2-0.

The incident is the second in the space of a few days to blight Spanish football after Atletico Madrid were fined €600 following an incident in which a fan threw a cigarette lighter at Cristiano Ronaldo during their Copa del Rey clash at Vicente Calderon on Tuesday.