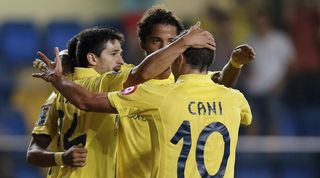 Marcelino Garcia Toral – a former coach of Betis’ arch-rivals Sevilla – brought his side to Andalusia on the back of a run of four wins and two draws, but they were unable to move above Real Madrid and into third as the home side claimed the points.

The visitors felt they should have had a penalty in the 33rd minute as Lolo Reyes pushed Cani to the floor after a clever run into the area, but referee Carlos Delgado dismissed their claims and Betis soon had the lead.

With 36 minutes gone, Sergio Asenjo denied Joan Verdu inside the area, but Nosa Igiebor was there to smash in the rebound.

Newly promoted Elche picked up their first win of the season at the seventh time of asking as they faced Celta Vigo in Galicia and managed to come away with a narrow 1-0 victory.

Fran Escriba’s side were dealt a cruel blow in the week when Real Madrid controversially picked up a 2-1 win against them due to a controversial late penalty, but they did not have to deal with such stress on Sunday.

The match’s only goal came in the 62nd minute as Javi Marquez ran through on goal, held off a defender and fired into the bottom far corner, clinching the club’s first win in La Liga since 1989.

Levante consolidated their place in the top half of the table by picking up a 1-0 win away from home too, but they left it considerably later against Osasuna in Pamplona.

The hosts missed a number of chances, but Jordi Xumetra gave Levante the win in the 88th minute after Pape Diop had his initial penalty saved, while Osasuna winger Alvaro Cejudo received a red card in stoppage time.

Getafe were the third team to pick up an away win on the day as they inflicted a second successive defeat on Espanyol with a 2-0 scoreline at Cornella-El Prat.

Adrian Colunga got their first 18 minutes from time as he knocked in Pablo Sarabia’s pass and he then added the second in stoppage time with a powerful strike after Diego Castro’s cut back.