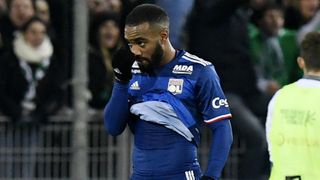 Alexandre Lacazette has been "destroyed psychologically" by the jeers of some Lyon fans after the striker suggested he could leave the club, club president Jean-Michel Aulas has said.

Lacazette angered sections of the Lyon support after he said the end of the season was the right time for a change of scenery ahead of their defeat to arch-rivals Saint-Etienne on Sunday.

The France forward was on the scoresheet as Lyon bounced back from that loss with a 4-0 thumping of Nancy, taking his tally to 19 goals in 20 Ligue 1 appearances this season.

But fans unveiled a banner during that game condemning Lacazette for his words and he was booed by some of the home crowd when he was substituted.

Speaking after the game, Aulas said: "Alexandre is destroyed psychologically because of what's happened and it was based on a misunderstanding.

"Because Alexandre didn't say that he wanted to leave Lyon to go and play for a big club. He was interviewed by one of your colleagues to talk about the derby and in the course of a sentence they said to him 'but would you [leave one day]?'

"Alexandre hasn't betrayed the club. He simply said that one day if like his friend Sam [Umtiti] he could go play for Barca or if like Karim Benzema, who left for Real Madrid and everyone was happy for him, he could go to a big club, he might.

"Why bring that out on the day of a derby? You're putting huge pressure on kids... in front of thousands of people who don't understand. I'm disappointed and it upset me."

Lyon captain Maxime Gonalons hit out at the supporters who booed Lacazette.

"It's unacceptable," Gonalons said. "There were some things said in the press that weren't interpreted in the right way.

"Alex is our goal scorer, he's invested in our club for a long time and he passed the 100-goal mark for Lyon this season.

"You can't boo such a player. You have to have a minimum of respect."