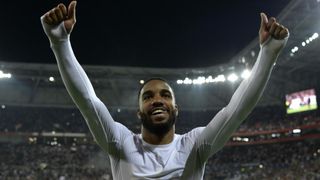 Alexandre Lacazette will remain at Lyon next season, that is according to the club's president Jean-Michel Aulas.

West Ham are reported to have made a large bid for the striker, but Aulas claimed the 25-year-old will remain with the club for another year.

Arsenal manager Arsene Wenger is also believed to be an admirer of the forward, who scored 23 goals last season but missed out on France's Euro 2016 squad, with Juventus also interested.

"We have had a few calls, but Alexandre will stay," Aulas told Canal+.

"I think it is his desire and the coach [Bruno Genesio] counts on him."

Benoit Lacazette, the striker's advisor, recently said his brother is open to a move to Paris Saint-Germain, who are seeking a replacement for new Manchester United signing Zlatan Ibrahimovic.

Lyon president Aulas also revealed defender Emanuel Mammana will have a medical at the club on Monday ahead of a proposed move from Argentine club River Plate, but midfielder Clement Grenier could be on his way out.

"Grenier is not expected to be here for the coming season," Aulas said.

"There has been an offer from Sunderland and an Italian club."